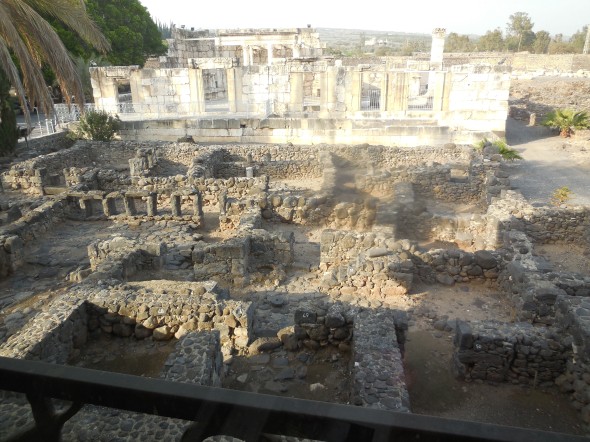 House Ruins in Capernaum, Israel – in the foreground is an example of a home with added rooms (Photo taken by the author in 2017)

John 14:1-6
‘Do not let your hearts be troubled. Believe in God, believe also in me. In my Father’s house there are many dwelling-places. If it were not so, would I have told you that I go to prepare a place for you? And if I go and prepare a place for you, I will come again and will take you to myself, so that where I am, there you may be also. And you know the way to the place where I am going.’ Thomas said to him, ‘Lord, we do not know where you are going. How can we know the way?’ Jesus said to him, ‘I am the way, and the truth, and the life. No one comes to the Father except through me.

The Gospel of John came into its current form between 90 AD and 110 AD. The historical context of time and place in which this gospel emerged helped shape the discourses and themes contained within it. Understanding the socio-cultural environment can help translate the use of symbols and metaphors employed by the gospel’s author in order to communicate the intended messages and teachings. This holistic approach underscores that it is not possible to understand any one passage from John’s gospel without a consideration of the way everything contained within the gospel is interrelated, internally consistent, and intentionally dialogical in construct.

The author whom Christian tradition names as “John” (although there is evidence indicating several contributors over time) is intimately familiar with the scriptures and symbol system of the Jewish faith, culture, and history. John is also familiar with non-Jewish sources of Greek philosophers and Greco-Roman mystery cults. By weaving together themes that were influential among the diverse populations of the Mediterranean, John presents an interpretation of Jesus that communicates common themes that would have been comprehensible and attractive to a wide-range of cultures and belief systems extant in the author’s time and place.

John is writing for a diverse Christian community experiencing a significant shift in communal identity as related to but independent of Jewish community and identity. The symbols and imagery evoked in the gospel open up the early Christian worldview to thoughts and influences beyond the Hebrew lexicon of stories and symbols representing the Israelite understanding of the Messiah. For John, the Messiah invites spiritual union between Christ and the individual that is unmediated and free-of-charge. This spiritual union is contrasted to the communal covenant with God requiring the fee-based mediation of Jewish priests and interpretation by Jewish teachers who have the exclusive cultural authority to do so. Liberating one’s relationship with the Messiah from Jewish mediation and interpretation is why John contrasts Christian belief from Judaism as it was identified in Judah, even utilizing messianic concepts from the Samaritan Jewish tradition.

For John, the importance of the innovation of a personal relationship with Christ is why the passage of John 14:1-6 is significantly illuminated when it is viewed in light of John 2:1-11, the wedding at Cana. I believe that that the symbolic language employed in the depiction of the wedding at Cana is a storyline that is completed in the symbolic language of Christ going to prepare a place in his Father’s house for those he will bring to where he is going.

Firstly, in the marriage traditions of the ancient Israelites, the father of the groom often selected a bride (kallah) for his son, as did Abraham for his son Isaac (Genesis 24:1-4). The consent of the bride-to-be is important. For example, Rebecca was asked if she agreed to go back with Abraham’s servant to marry Abraham’s son, Isaac, and she went willingly (Genesis 24:57–59). Mutual agreement was required for a valid marriage contract.

John’s gospel uses the image of marriage at the wedding of Cana as the central image of the nature of the believer’s relationship with Christ – namely, a spiritual, intimate, and mutual union. Further, the illustration of water turned to wine at the wedding feast encodes the early Christian teaching coupled frequently in John’s gospel, linking baptism to the pascal feast – both are celebrations and occasions of our spiritual union with Christ. The symbol of wine employed in the joyful experience of a wedding is linked to the wine used in the Last Supper, specifically the cup of wine reserved for after the meal which is traditionally associated with the joyful expectation of the arrival of the Messiah.

The link between the waters of baptism and the wine representing Christ’s sacrifice can be found in the traditional preparation for the Jewish betrothal ceremony. Namely, the bride (kallah) and groom (chatan) are separately immersed in water in a ritual of mikvah, which is symbolic of spiritual cleansing. For John, Jesus has already been immersed (baptized) by John the Baptist in the waters of mikvah at the Jordan River, in preparation for Christ’s union with his Beloved, which is each of us. From John’s use of symbols, the community is to understand that baptism serves a similar purpose.

After the immersion in the mikvah, the betrothed couple enters the huppah (marriage canopy)—symbolic of a new household being planned, to establish a binding contract. Within the symbol of home, the groom would give the bride a valuable object such as a ring, and lastly a cup of wine was customarily shared to seal their covenant vows.

After the betrothal ceremony, the bride returned to her mother’s house, while the groom departed to his father’s house. This period of separation lasted about a year, providing time for the groom to add additional rooms to his patrilineal household in order for him to prepare for welcoming his bride into the household of his father. Although the bride knew to expect her groom after about a year, she did not know the exact day or hour. He could come earlier or later than was expected. For this reason, the bride kept her oil lamps ready at all times, just in case the groom came in the night (Matthew 25:1-13). It was the father of the groom who gave final approval for the time for him to return to collect his bride.

When the time came, the bridal procession was led by the sounding of the shofar to the home he had prepared for her. The final step of the wedding tradition is called nissuin (to take), a word that comes from naso, which means to lift up. At this time, the groom, with much noise, fanfare and romance, carried the bride onto the property of his father’s home. Once again, the bride and groom would enter a huppah, recite a blessing over the wine (a symbol of joy), and finalize their vows. Now in their home, the bride and groom lived out their covenant of marriage – the traditional Jewish version of “and they lived happily ever after.”

In her book, “Beyond Belief: The Secret Gospel of Thomas,” Elaine Pagels suggests that John’s gospel is a direct response to the emerging Christology of the community that gathered around Thomas, which is why John portrays Thomas as having a theologically challenged Christology. Now as then, different Christian communities have different
understandings of Jesus and can hold conflicting beliefs of how to interpret Jesus and the stories that are our collective legacy about him.

While both the Gospel of John and the Gospel of Thomas value the individual’s relationship with Christ, The Gospel of John and its basic tenets seem to be in direct opposition to Thomas. John says that he writes “so that you may believe, and believing may have life in [Jesus’] name.” Thomas’s gospel, however, encourages us not so much to believe in Jesus, as John says, as to seek to know God through one’s own, divinely given capacity, since all are created in the image of God. The Gospel of John speaks from a multivalent symbol system in which there are “rooms” for each person to have a unique relationship with Christ but which are also an interconnected part of the common household of the Father. The Gospel of John, therefore, provides a foundation for a unified church, which the Gospel of Thomas, with its emphasis on each person’s search for God, did/does not.

For the author of the Gospel of John, the belief that Jesus is the Messiah is sufficient common ground for unity. Each believer is a bride to Jesus the groom, expressed and experienced through Baptism and communion. The house of Christ’s Father has many rooms, because Christ has prepared a place for each person that the Father has approved or “given to him.” When John reports Thomas asking, “How do we know where you are going?” the question represents the emphasis John perceives in the Thomasine community regarding the path of gnosis, which appears to focus on secret knowledge held by the few over belief that makes God readily accessible to all. The response given by Jesus, “I am the way and the truth and the life,” emphasizes John’s teaching on the primacy of belief. In the Gospel of John, a community of believers is bonded together through a shared belief that Jesus is the Messiah, while also making room for the validity of individual relationship with God through a shared and public belief.

For the author of the Gospel of John, the Christian community for whom the author is writing is diverse, informed by mystery traditions and covenant traditions, populated with peoples drawn from multiple faith traditions, histories, and cultures indicative of the Roman Empire. What they hold in common is a desire for liberation from tenants of the belief systems influential in their time (Jewish and Roman) that restrained them from practicing social and spiritual equality before God and with one another. Every individual in the community of the faithful has free and equal access to God, and the way to that access is by agreeing to enter a spiritual union with Christ that while mystical is not at all mysterious, and while binding is not legalistic in nature but rather a mutual commitment to love one another. Personal love for God is expressed in one’s commitment to live together in community, as represented by the many rooms in the Father’s unified house.

Throughout the generations of the church, ideas of how to achieve unity amidst our Christian diversity has been often elusive. We identify instruments or statements with which we are expected to agree, but such relationships seem always to be conditional. Alternatively, in the Gospel of John, we are all of us brides in love with the same groom, and if we are truly in love with God, then our hearts ought not to be troubled – for truthfully, in our Father’s house, there are many rooms. Within an incarnational theology of the Body of Christ — the church — the rooms are ours to build for one another. For John, the concluding line, “No one comes to the Father except through me,” is not exclusionary. Rather, the symbols used throughout the gospel convey that everyone can have access to God, if they simply believe in the love that Christ has for them and live by the wide embrace of that covenant for all people.

One thought on “Diversity & Inclusion: The Holy Covenant of Faithful Community”