Many of the stories were lost when the wooden masks were burned.  Each mask told a unique story, but European missionaries didn’t like our stories.  They didn’t like our dances that were our way of telling each story, and they definitely didn’t like our medicine people who told the most sacred stories – who wore the masks of the Spirit People and told about how Creator made them and why. The fire we once danced around in celebration became a funeral pyre of stories we no longer remember.

Some masks escaped the flames, when European traders found some that were buried for protection or bought them in exchange for guns, alcohol or even just food. Some masks they simply took. They sold the masks to museums and collectors.  Now some of our most ancient stories are locked away in museum collections, scattered all across the world – their carved and painted mouths are mute and waiting for the next dance circle that will not come. The elders say that it takes a medicine person to heal the divide between the Creator and those who have not honored Creation. This is why I know that if Christ walked the earth today, he would be Native.

In our tradition, masks of the Spirit People have some traits in common, which is how you can tell that they are sacred texts and Creator stories. The central face of the mask is a familiar animal, one that we traditionally rely on for food or clothing – a beaver, a bird, a deer or a fish, for example. The face is then surrounded by two or three concentric hoops that are spaced apart.  The outmost hoop will have two small human hands, one protruding from each side.  The hands have holes in the center of each palm – these signify Creator’s hands. The Creator is, therefore, understood to be dressed in the animal form depicted in the center of the mask.

The hoops represent the ability that souls and Creator have to move between the spheres of the human world and the realms of the sacred. It is said that both the souls of the animals (i.e. Spirit People) and Creator observe humans to see how well animals are honored when they have been hunted and to see how well resources are distributed among the human community. If the Spirit People see that they have been treated well, they return to earth (through spiritual rebirth) in the next hunting season so that they can provide for the human community again.

Creator is responsible for the lives of all the Peoples, of the various animal and insect peoples as well as the human community. The holes in Creator’s hands employed on the mask signify divine generosity. We are to understand that while Creator holds all life in divine care,  Spirit Beings have the freedom to give their lives so that humans and other animals may live – they can choose to leave the Creator’s hold through the holes in Creator’s hands so that they can give their lives to support other Peoples.

In Shackan Native cosmology (and that of other indigenous peoples), there is a sacred collaboration or reciprocity between all beings as well as between the earthly and heavenly realms.  Creator masks tell the stories of human relationship with the divine – they speak eloquently of the sacred relationships on which we depend and of which we must take care to maintain.

In contrast to the Shackan image of God, the Christian immigrants, who came from Europe to the shores of this land, brought with them an image of Creator that was very different from ours:

Then God said, ‘Let us make humankind in our image, according to our likeness; and let them have dominion over the fish of the sea, and over the birds of the air, and over the cattle, and over all the wild animals of the earth, and over every creeping thing that creeps upon the earth.’ (Genesis 1:26)

When the ancient Israelites entered the Promised Land, they did so with varying degrees of war and assimilation of indigenous Canaanite civilizations in order to gain that land, which was no more vacant than when Europeans immigrated to the shores of this country. The Israelites and the Europeans – though separated by time and cultures – shared a common image of God as a dominating being with whom they had an exclusive contract, a relationship the quality and guarantees of which no other human community or creature could possibly have.

Over many generations and across the Native world, the legacy of the Doctrine of Discovery has brought death to indigenous peoples and societies in the form of a pyramidal cultural cosmology.  In stark contrast to a circular hoop of spiritual equality and recognition of interdependence, the pyramidal domination system is one in which God is depicted as an exclusive, entitled narcissist. It should not be surprising, therefore, that those who believed that they were created in this image of God behaved like exclusive, entitled narcissists. Unfortunately, this particular image of an elitist God seems to continue to inform social elites today.

However, I am fairly certain that the first century reform movement initiated by Jesus of Nazareth was meant to offer an alternative image of God. For example, the first thing I note about the risen Christ is that he has holes in his hands.

By the holes in his hands, Christ grants freedom and choice to all beings; he understands and respects the nature of self-sacrifice so that others may live; and like a mask of Creator, he is a being that the human community can see and touch and that can bridge the spiritual world to the human by the sustenance of his body and blood. He reconciles all of Creation to the Creator.

Is Christ not the Lord of the Dance and did he not have many stories he shared about God and heaven? Are we not called to gather around the Light of Christ, who gifted us with the Spirit – an eternal fire at the center of the Community, around which all Peoples recognize their language and way of being and are called to share of their unique expression?

From the beginning, Christ was with the Creator and came to teach people how to live in a good way, how to care for one another and not to measure their worth by things but to aspire to other values — of courage, generosity, compassion and love. This image of God is one that I recognize, for he has been with my people from the beginning of our generations.  The Europeans did not bring him to us – he was already here.

However, this image of Christ looks like us. So, perhaps it was hard for some to recognize him in our mask.  Perhaps, this truth is what many still need to discover. 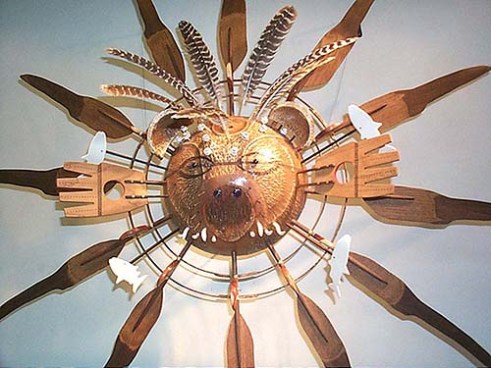