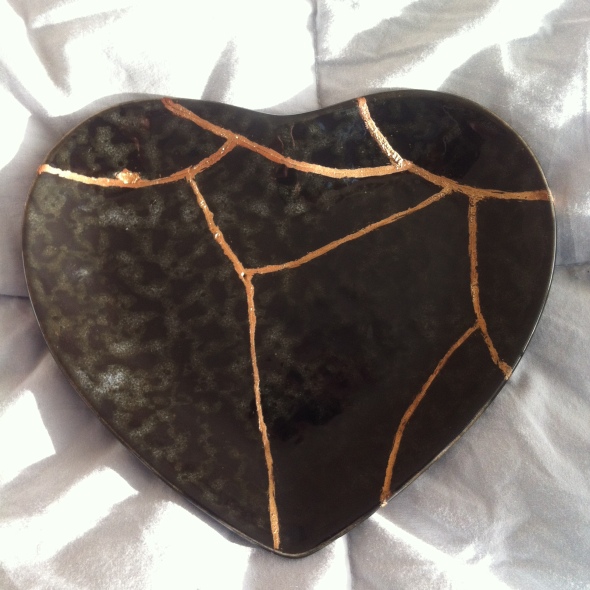 Kintsugi of The Heart

We have come together this evening, a composition of the diversity of American culture and identity – united by a shared grief and a common comprehension that prejudice creates an intolerable dissonance within a nation founded on principles of freedom, equality and justice for all.

There have been many early responses over the past few days since the lives of 49 people were taken and 53 more people were left injured and bleeding in the Pulse Nightclub in Orlando early in the morning on Sunday, June 12th. Some responses have been predictable, because – unfortunately – by now in our national life, they are all too familiar.  In some ways, as The Late Show host, Stephen Colbert, observed, “It’s as if there’s a national script that we have learned. And I think by accepting the script we tacitly accept that the script will end the same way every time. With nothing changing.”

Indeed, nothing can change when people are drawn into a cycle of violence that leads to fear and scapegoating that leads to more violence, fear and scapegoating.  Hate is like using a hammer to fix cracks in a precious ceramic bowl. Violence only further breaks what we would repair.  The only force that can bring healing, to a world, a nation, a community, a family, a person, or even a bowl is a mind motivated by love.

Kintsugi is a Japanese technique of repairing broken pottery with gold.  Translated as “to repair with gold” or other precious metals, the philosophy behind Kintsugi approaches breakage and repair as part of the valued history of an object, rather than something to disguise. It embraces what is flawed or imperfect, cherishing marks of wear made by use. Using gold resin to rejoin the broken pieces has the effect of highlighting or illuminating the repaired cracks as an historic event in the life of an object.  The bowl is not simply thrown away.  Rather, Kintsugi resurrects or empowers the bowl to continue its usefulness, with even greater beauty added to its vulnerability.  The ability of the bowl to be of service to the needs of others does not end at the time of its damage or breakage.

Like Kintsugi, our conversations and interactions – both in our personal lives and in our national life – moving forward from the tragedy in Orlando must realistically highlight our social fractures, while also being compassionately committed to repairing what is broken. We must not hide or minimize our wounds but work to fuse one community to another with the gold that abides within each of us – our ability to love.

As Lin-Manuel Miranda summarized in an original sonnet he shared with our nation at the annual Tony Awards on Sunday night:

I believe that this is the summary of Christian faith for our day. The fact that this Gospel comes from an inspired American (born in the northern Manhattan) and of Puerto Rican heritage causes me to hear the echo of the voices of those who died in Orlando within the violated sanctuary of Pulse Nightclub.  They were mothers, fathers, sons, daughters, somebody’s children, friends, committed partners, lovers, dreamers, and artists. At least three same-gender couples died together, and one of these couples will be buried together in death (Juan Ramon Guerrero, 22, and his 32-year-old boyfriend, Christopher “Drew” Leinonen), because they were not able to be married in life.

Within the divine work of loving one another, it must be stated clearly here in this sanctuary space that peoples of all faith traditions – most particularly the Abrahamic faiths of Judaism, Christianity and Islam – must challenge those within our respective religions who attempt to justify the alienation, discrimination and persecution of LGBTQ peoples or any minority in the name of God.  We must refine our hearts into the gold that we need to be, in order to be repairers of the breach that we helped to create within the history of human civilization.

As many have said, prayer alone is not sufficient for the work we must do together. Jessy Briton Hamilton, a school teacher and advocate within LGBTQ community, is also a member of The Episcopal Church.  He writes, “I believe very strongly in prayer, but the point of prayer is not to persuade God to grant our wishes, but to move us to action. Prayer’s power is in its ability to move us to change; to transform us. If you’re waiting for God to stop gun violence, terrorism, or homophobia, then you’ll be waiting awhile. You’ll be waiting until you wake up to realize that you are the only hands and feet and voices God has in this world. So keep praying, but don’t expect anything to change until we all come together to DO SOMETHING.”

The American Muslim community has reacted with an outpouring of love and support in the wake of the deadliest mass shooting in U.S. history. The support came in the form of fundraisers, blood donations, and public statements that firmly condemned the violence. Hassan Shibly, chief executive director of CAIR-Florida [Center for American-Islamic Relations], called for unity in a Facebook video, saying that it was important not to allow politicians to use this attack to “promote fear, division and hate” within America. “America is one of the best places in the world to be a practicing Muslim,” said Shibly, “To be Jewish, to be Christian, to be atheist, to be whoever you want to be, it offers us more freedom to practice our religion than almost anywhere else.”

Joshua Friedes, Director of Rabbinic and Synagogue Engagement at J Street in Seattle shares, “I am, like so many, profoundly depressed by the violence in Orlando. Forty-nine predominately young LGBT Latinos were robbed of living in a changed America, a country where the overwhelming majority now embrace gays as part of the fabric of our imperfect but nonetheless great nation….  As a middle aged White Gay Jewish man who has lived most my life in a virulently homophobic society… I am realizing the America into which I have become equal is not the America I want, even while it is the nation I love. America is a great nation. We must understand that our diversity is our superpower.”

Indeed, in the wake of the shooting in Orlando, many people – from many communities, ethnicities, faiths, and orientations of love, from both sides of the political aisle and across the economic spectrum are taking collective action.  President Obama, who has been confronted with addressing our nation no less than on 18 occasions of mass shootings prior to Orlando, shared the reminder that, “Regardless of race, religion, faith or sexual orientation, we’re all Americans, and we need to be looking after each other and protecting each other at all times in the face of this kind of terrible act.”

The largest medical organization in the United States, the American Medical Association, passed a historic resolution this week in response to the weekend’s mass shooting. After years of tiptoeing around the topic of gun control, AMA leaders voted to officially call gun violence a public health issue — and respond accordingly. That means flexing the organization’s powerful political muscle on Capitol Hill to refocus federal funds toward studying gun violence.  To see this through, however, Congress would need to lift a 20-year-old ban that blocks the Centers for Disease Control and Prevention from funding any research related to gun violence. However, the AMA, with one of the largest political lobbying budgets of any organization in the U.S., appears ready to fight for all of us.

The solutions to the complex set of interrelated issues that contribute to mass shootings in America will not be easy to achieve. The challenges involve several issues – such as mental health care funding and provision, immigration policies, gun legislation and regulation, discriminatory laws that reinforce old social patterns of prejudice and privilege, racist attitudes and beliefs towards immigrant populations and LGBTQ peoples, and fear-based assertions about the Muslim faith – just to name a few.

Yet, there is much being spoken, shared and enacted in response to the Orlando shooting (as added to a history of loss in our nation) – upon which we can base a reasonable (and holy) hope.

The Republican Lt. Governor of Utah, Spencer Cox, addressed the vigil held in Orlando on Monday night (on June 13th) to honor the victims and survivors of the shooting.  He confessed that his thoughts and beliefs about LGBTQ people had changed and that he had needed that change.  However, he also acknowledge the challenge remaining of changing the hearts and minds of many more who continue to think and legislate from the type of discriminatory beliefs that he once held.

“But just because an easy solution doesn’t exist, doesn’t mean we shouldn’t try,” he said to the diverse crowd gathered at the vigil, “The greatest generations in the history of the world were never innately great. They became great because of how they responded in the face of evil. Their humanity is measured by their response to hate and terror.  I truly believe that this is the defining issue of our generation. Can we be brave? Can we be strong?… What our country needs more than ever is less politics and more kindness. If nothing else, as we can see here tonight, this tragedy has the potential to bring us closer than ever before.”

Finally, over the last three days, more than 20 Hispanic organizations have formed a coalition called “Somos Orlando,” which is offering assistance to the victims’ families. While the United States offers a bit more stability, Puerto Ricans and Latinos in central Florida still face a number of challenges—ones that make it complicated for shooting victims and their families to access resources. For example, many families have not come forward because they are afraid, based on past experiences of their community involving immigration policies and practices.

Even though many groups have come out to show solidarity with the LGBTQ community after the shootings, this kind of tragedy is particularly difficult because of the lack of acceptance for LGBTQ people among some Latinos.  The loss of so many of their promising young people has caused a level of conversation within their communities that will challenge their traditional cultural understandings of gender and identity. However, they are certainly not alone in addressing such challenges.  A diverse spectrum of hearts and minds must engage a journey of socio-cultural and personal transformation.  Our commitment to be in relationship with one another is vital for our mutual success.

In many, many ways, then, the deaths of 49 beautiful men and women, who were simply being true to who they were, will continue to inspire the positive actions of thousands – bringing together the many pieces representing diverse communities and governance structures that have been living in a condition of isolated fear.  The love that these 49 people felt and shared and incarnated through who they were is the gold that is even now illuminating where we need to come together – uniting us across many differences so that we can be both imperfect and more beautiful, stronger than before and broken no more.